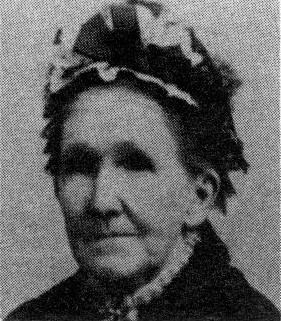 Maranda Cazier was the daughter of William and Pleasant Drake Cazier. She was born at Elizabeth Town, Wood County, Virginia on Christmas Day December 25, 1818.

Sometimes to appreciate the finite or infinite in the make-up or nature of an earthly being, we have to know something of the mate who went along with that person, for how often (but perhaps little realized) is the life emotions and character qualities or human elements of that person influenced by the other person. With what beauty and peace a life can be viewed where there is the understanding teamwork, or whatever you may call it, where two lives are fused into a successful effort to make a marriage or partnership all it should and could be. So I add this bit of the history of Charles Hinckle Bryan, the husband of this dear woman, so you may more fully understand the fineness and beauty of such a good woman as she was.

Her husband Charles Hinkle Bryan was married first to Jane Collins Bryan, and that marriage was blessed by a son named John Henry Bryan. The mother died when this boy was only five years old. Then the good father and the little son John became restless and traveled about the country on horseback. They were made welcome everywhere and everywhere in Illinois were received by relatives and so made many friends. Then came a day and the trail of their journeyings came to a tavern called Black Horse. Just before they had been so lucky as to shoot a wild turkey, and it was their desire to have a fine turkey dinner prepared at this inn. As they came up to the tavern and dismounted, a young lady who was Maranda Cazier rode up on a fine mare and Charles Bryan (being a lover of and knowing fine horses) proceeded to admire the mare. He asked if it could be for sale. She replied “NO”, it was her very own and she enjoyed riding over the grassy prairie. It was her main form of recreation. She seemed to be hostess and helped her father run the tavern. This was in the spring of 1841, and after this Charles Bryan and his young son John were often at this tavern. The tavern was located at Lovington, Illinois, 150 miles south of Chicago, Illinois.

In those days this was the border for western civilization and it was called “God’s Country” because the setting was so beautiful showing through the tall prairie grass. Near here Father Bryan and the little son John found a spot that looked more like home. The romance between these two fine people was heightened and nurtured by the love of both for this fine little son John. Many times “Miss Maranda” as they affectionately called her, took little John for a ride over the prairie and he in his fine youthful enthusiasm confided in her many things, one particularly of his desire to stop roaming with his father and for them to find a place to build a little home and to have a mother there to love him. This , too, he confided to his father Charles and telling him “Miss Maranda” would make such a wonderful mother and Turkey Spring such a fine place to build the cabin and then their roaming days could be over. Charles, the father, noted that Miss Maranda had about her many features that he admired. She was a young queen of modest dignity as she presided at the tavern. Everyone found occasion to give her respectful attention and there was about her and the words she spoke a religious grace and a joy that brought joy to others. He admired the way she looked in her neat riding habit as she sat on her beautiful mare Minnie. Maranda’s love of this happy little boy John helped a romance blossom between herself and Charles.

The little cabin was planned with the thought in mind of a day when she would come as a bride there. Many loving thoughts and extra effort went into its planning.

Charles K. Bryan was 34 years of age and Miss Maranda was 23 at this time.

The church they so often attended was a Baptist one – under the Reverend Abraham Keller. Often the little boy was taken by Miss Maranda [to] this church. Charles often allowed the boy John to stay with Miss Maranda at the tavern helping her there.

The romance of the two – Charles and Miss Maranda – developed and was enhanced by the love of this fine little boy John. They had entrancing rides over the prairie both by horseback and by sleigh. The fine cooking and lunches prepared by Miss Maranda would help, no doubt, confirm the admonition, “The way to a man’s heart is through his stomach.” Also noted was the beautiful handwork done by this lovely girl Maranda.

Father William Cazier and his fine wife Pleasant Drake Cazier and noted the romance springing up between these two fine souls and were ready to accept and say “yes” to this young man Charles Hinkle Bryan when he asked for Miss Maranda’s hand in marriage.

The new home at Turkey Spring was finished and was ready for this lovely partnership to blossom and be nurtured in.

A trip to Decatur, Illinois was made to visit Charles Bryan’s folks and to purchase furniture and to bring back many of the things that Maranda’s nimble fingers would make to beautify and make this a lovely home in the wilderness and on the fringe of Western civilization at that time.

So on the 27th day of June 1842 they were married by the Reverend Abraham Keller in the dining room of the tavern. Friends were summoned by a brother of Charles – John Bryan. They were all there to celebrate and prepare the feast and to join in wishing this marriage happiness and blessings upon it for the days to come.

Always there seemed a humble and sincere gratitude about this companionship expressed in so many ways – little humble prayers showing a thankfulness and appreciation that has warmed my heart and made me thrill as I gleaned this from the pages of my gifted father-in-law, William A. C. Bryan’s writings. His mother, Maranda Cazier was 5 feet 4 inches tall weighing 130 pounds. She was friendly, her eyes were blue and had a fair complexion with a healthy glow of pink. She had think, black, wavy hair and a graceful dignified carriage.

William Cazier, father of Maranda was devoutly pious and his life was tipified by expressions of gratitude and thanksgiving, especially at the time of Christmas and Thanksgiving. During the years 1843, 1844, and 1845 this little trio spent Thanksgiving and Christmas in peace and happiness at their Turkey Spring home. This was near the territory of Lovington, Illinois. The Mormons were driven from here – James Cazier, Benjamin Cazier, and John Cazier were among the Mormons together with Andrew Love and James O. Bigelow who were pushed out of Lovington, Illinois.

Father W. A. C. Bryan later made a visit back to his mother’s and father’s homestead in Lovington, Illinois and was told much of this narrative by John Love of Lovington. John’s brother Andrew Love was persecuted and driven out of Illinois and proceeded to Council Bluffs, Iowa with William, James, John and Benjamin Cazier. They arrived there July 1, 1846.

During the winter of 1846 this little family stayed in the cabin built at Council Bluffs. It was there that a girl baby1 was born to them on April 12, 1847. She died at Salt Lake City in February 1849. Most of these families mentioned remained at Council Bluffs during 1847 and 1848.

From here on this history of Charles H. Bryan and Maranda Cazier is interwoven with the history of the Mormon trek westward. They suffered with the others the pangs of hunger, the lonely nights, the weariness of a long journey.

Charles Hinkle Bryan and his wife, Maranda Cazier left Council Bluffs May 19, 1848 and arrived at Great Salt Lake City September 22, 1848. He had been baptised and confirmed a member of the church in July 1846 at Mosquite [Mosquito] Creek, Iowa. From there they had proceeded westward in a company of Mormons under the direction of Brigham Young2.

They entered the Salt Lake Valley September 22, 1848. It was here that William A. C. Bryan was born on April 5, 1849. The family stayed here until the 22nd day of October 1851 when they moved to Nephi with a company of 17 families. They reached here about the first of November 1851. From here on Maranda Cazier Bryan’s history is interwoven with the building and establishing of the new community of Nephi. It’s joys and sorrows were shared alike be these two wonderful souls. Maranda was the mate who stood beside her husband giving him sustaining help as he administered to his many church duties and as he ministered to the sick and weary. He had studied surgery in Kentucky and was a doctor. He was also a bishop in the church and Maranda stood by his side as a ministering angel in helping care for the needs of a ward established in a new territory. Always hers was the kind word, the helpful hand, the loving smile that helped smooth the rigors of hard times away. Standing aside in perhaps glory unmentioned – but none the less real and lasting deeds and impressions made. Often William A. C. Bryan told of the wonderful cooking she did and of the entertaining of many guests who came with Brigham Young to their home. Patience and work this entailed, but the desire to be of service to those who served God entered the fine spirit and soul which was hers.

A son3 Joseph Cazier Bryan was born November 28, 1853 at Nephi. During this time she also accepted into her home and life the second wife of Charles, her husband. She was affectionately called “Aunt Julia” by William A. C. and Joseph Bryan.

Her sons had married and the romances of their lives were only echoes of her own from the long ago. The birth of grandchildren was a thrill that sprinkles later life with diamonds to shine and carry on in the years to come by the fine heritage she left them. With gratefulness and humility we thank God for such wonderful beings to be the progenitors of our family.

Notes:
1. This would be Eliza Jane Cazier. There was also a stillborn son born when they lived in Lovington, Illinois, but we have no other information on him.
2. Charles (age 40), Maranda (age 29), John Henry (age 13), and Eliza Jane (age 1) came in the Brigham young company which left Winter Quarters 5 Jun 1848 and arrived in Salt Lake City 20-24 September 1848. 1220 individuals were in the company when it began its journey from the outfitting post. Information from Mormon Pioneer Overland Travel, 1847-1868, online at lds.org.
3. Another son Charles Hinkle Bryan was born 8 Sep 1851 in Salt Lake City and died 30 Jan 1853 I assume in Nephi as they were living there by that time.