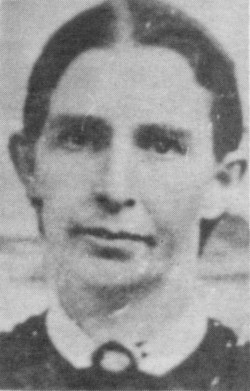 Elizabeth Cazier was born February 1, 1829 in Brownsboro, Kentucky, the daughter of William Cazier and Pleasant Drake.

On May 7, 1848, Elizabeth and James Otis Bigelow were married. James was born in Junius, Seneca County, New York, to Isaac and Angeline Prentice Bigelow. The family moved to Illinois in 1830, where his mother died when James was eight years old. As a young man in Nauvoo in 1846, he responded to a call soliciting young men to go West as pioneers. James and his friend, Benjamin Cazier, spent the summer helping to build roads and bridges and open up farms at Mt. Pisgah and Highland Grove, stopping places for the Saints who followed them.

In September 1851, they arrived in Salt Lake City. They lived in Juab County until 1861 when they moved to Millville. They bought a lot just above the lower canal on what is now First South Street, and on it they built a small two room home for their family.

In 1864, James was appointed Water Master. He was post¬master from 1868 until his death. He also kept a small grocery store. On October 20, 1886, he met with an accident while hauling wood from the canyon. He was thrown from the wagon, crushing his leg. The resulting gangrene caused his death.