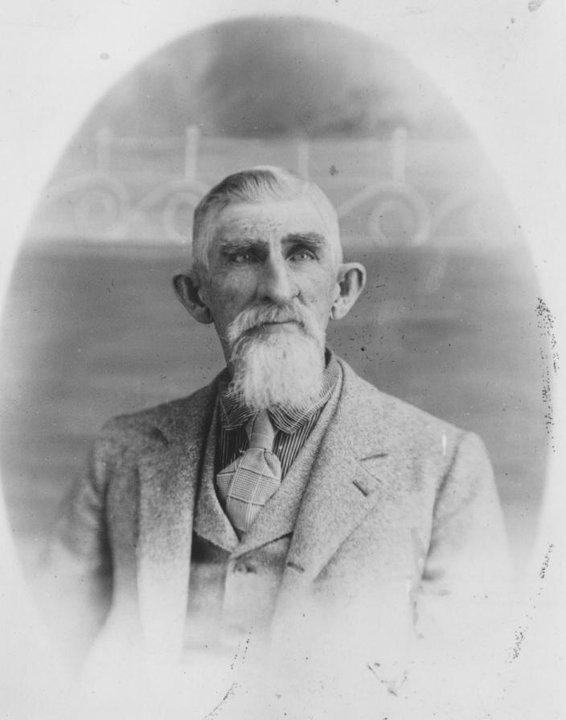 He was born in a log cabin by a little spring in the middle of a large field. After his brother, David, was born (1834), the family moved about a half mile and lived in a better house on a rented farm.

In 1841, the family moved to Moultrie County, Illinois, and ran the “Black Horse” Inn, which was located at Lovington, Illinois (150 miles south of Chicago, close to Decatur, Ill.)

In the fall of 1844, the family was driven out of this area because they had joined the Mormon Church. They moved to LaHarpe, Illinois, about 18 or 19 miles east of Nauvoo, Ill.

In the spring of 1846, they started west, crossed the wide Mississippi River at Fort Madison, Iowa, arriving at Highland Grove (on Keg Creek), Iowa in August of 1846. Iowa being so sparsely settled, they were forced to make their own roads, with great difficulty, also it rained so much they had to contend with deep mud. They camped sometimes a week in a place and then moved on again. Samuel suffered awfully with a toothache, no one had anything to pull teeth and no doctor in the camp.

Samuel was baptized a Mormon on 15 July 1846 and is reported to have been a very devoted church member.

They were told by Brigham Young to stop at Council Bluffs, “build cabins and cut hay for our cattal and go down in Missoury and work and get what we could and wait till next spring.” They took abode in a hay shed, living there until the spring of 1851, when they started their long trek to Salt Lake in the company of sixty wagons under Captain Morris Phelps.

About the time they arrived at the Platte River, Samuel took sick with mountain fever and was expected to die, however, he pulled through this illness.

The last day of September 1851, they ascended the big mountain where they could see the Great Salt Lake Valley (the promised land). They arrived the next day (October 1) in Salt Lake City.

On October 22, 1851, Samuel and his family departed in covered wagons to Salt Creek settlement (Nephi, Utah) arriving on October 31, 1851. They built a log house on the west bank of Salt Creek. The logs were obtained from the canyon, a distance of 10 miles (probably Salt Creek Canyon, east of Nephi.)

In the spring of 1852, his father contracted to supply a saw mill with logs in Mountain Pleasant Canyon and Samuel chopped logs for him. During the late summer of 1852, Indians began to be troublesome, which turned into the spirit of war and destruction. Chief Walker of the Ute Tribe went on the warpath and as Nephi was vulnerable on all four fronts, Samuel assisted in building an adobe fort on the two blocks where the courthouse and First Security Bank now stand.

The doors and windows were on the inside of the fort, with the outside walls being very thick and dotted with portholes to fire from. All men and boys over 15 had to bear arms and stand guard half the night, every other night, and work in the fields all day. This vigilance continued for 12 months until a treaty was signed.

On 1 November 1853, SAMUEL married HARRIETT ELMER, daughter of Cleon Elmer and Emily Clark. She was born 9 June 1834 in River Branch, Michigan. They were married in the Endowment House in Salt Lake City, Utah.

In 1857, City of Nephi furnished 50 volunteers to protect families and property from the rumored invasion by General Johnson’s Army sent by President Buchanan to “exterminate the Mormons.” Samuel was one of the volunteers. They went to Salt Lake and were ordered on October 10, 1857 to go to Echo Canyon as guards. On December 3, 1857, they were dismissed to go home. They traveled all night having traveled through cold and snow, arrived in Salt Lake at daybreak. They rested one day and started for home, arriving in Nephi on December 5, 1857.

During 1860, Samuel Cazier located a ranch near a place called “Chicken Creek,” the forerunner of the present town of Levan. Martin Rawlins, Edcil Elmer, Ray Elmer and others followed soon afterwards.

In 1865, the Black Hawk Indian War broke out. To guard their town and assist in guarding neighboring settlements, two companies of Militia were organized in Nephi, consisting of a cavalry company, commanded by Captain Samuel Cazier. They also carried express to Fillmore and had a two week stint at Fort Gunnison. Samuel served in this war two years.

By May of 1866, most of the people living at Chicken Creek moved back to Nephi seeking safety against Indian attacks, however, most of the settlers returned to their homes during the fall, as they had attended their crops and their farms during the summer.

Samuel was elected Sheriff of Juab County and served in that capacity for a number of years.

The following passage was taken from: “They left a Record” by Keith N. Worthington, Sadie H. Greenhalgh and Fred J. Chapman:”

“Indians were not the only ones stealing cattle. A few whites indulged in the same pastime. During June l868, Sheriff Samuel Cazier took a posse to Warm Springs west of the Settlements, in search of cattle thieves. A herd of cattle, stolen from Nephi was found and returned to Nephi and a man by the name of Marshall was arrested at Scipio and taken to Nephi to stand trial for the crime.”

“Let me mention here that in 1865 or 1866, I went with the Sheriff and 8 other men about 100 miles west to look for supposed cattle thieves. While out there another company came and they mistook us for the thieves. It was in the night and we were in bed and came nearly losing our lives. The party called upon us to stack our arms or we were dead men. My brother Samuel being the sheriff said “No, he would die first.” There were six riflemen with their fingers close to our breasts. In this critical moment I happened to realize who they were and called their names, and saved our lives as by a thread.”

During a Horton-Cazier family reunion in Ely, Nevada in l986 or 1987, I found out that Robert (is this name correct?) Fisher (son of Grace Cazier Fisher) has Samuel’s Sheriffs Badge. It is made of a silver dollar with his initials on it. In the center a star is inlaid with gold. The Fisher Family (I believe Ted) is also in possession of Samuel and Harriett’s Bible.

On Sunday, October 8, 1876, at the semi-annual Mormon Church Conference held in Salt Lake City, Samuel was “called” to go on a mission to the United States. If and when he served this “mission” is not known at this time.

The 1880 United States Census lists Samuel Cazier’s Occupation as Sheriff, so he must have served as Juab County Sheriff for some time. In the late 1880’s Samuel and his family moved to Wellington (now known as Mills). This farm was located about 22 miles southwest of Nephi, on the bottom lands skirting the Sevier River as it passes through the mountains toward the great plain below. This farm is still referred to as the “Cazier Farm” although it has not been occupied by the Caziers since 1901. There is no ranch house standing now.

Prior to 1883, this location was nick named “Sucker Town” because it was settled in the earlier days by a number of outlaws, who made it their special business to steal cattle from their neighbors.

On 9 June 1895, Samuel was sustained as presiding Elder of the Wellington Branch of the Juab Stake. He held that position until 1897, when the branch was discontinued, as most of the people had moved away from the locality.

In the year 1900, we find Samuel and his wife Harriett residing in the town of Nephi. The home they occupied is still standing and in good condition. It is located on the corner of Center and 3rd East. According to a neighbor, Mrs. LaRue Johnson, Granpa Owen and his brothers were the ones who built the home. Mrs. Johnson is related to Mom through her mother, Mary Elizabeth Hawkin’s Mother Elizabeth Pass.

On 25 September 1901, the original pioneers then surviving were honored at Nephi’s 50th year Jubilee. Samuel and Harriett were among those honored. The celebration lasted 2 days and consisted of parades, public meetings, operas, dances and speeches.

Samuel is described by his Granddaughter Maude Ingram, as having had thick hair “black as a raven” in his younger days; and Maude related a statement her own father made “he could have been a rich man if he was not so kind and unselfish.”

HARRIETT ELMER CAZIER died 27 February 1904 in the home of her daughter, Emily Cazier Ingram. Nephi City Death Records show cause of death as paralysis (stroke), she was buried 4 March 1904 in the Cemetery located on 4th North and 4th East, Nephi. The attending physician was F. B. Steele.

SAMUEL died 12 April 1910 in the home of his daughter Emily, attending physician D. O. Miner, and was buried in the same cemetery as his wife.

His Obituary as published in the Newspaper:

Samuel Cazier was a Nephi and Mills, Utah pioneer. He was one of the first settlers of Nephi and an Indian War Veteran. He was born in 1831 in Oldham County, Kentucky and when but a few years old he moved with his parents to Nauvoo, Illinois, with the Mormon Exodus and traveled to Council Bluffs, Iowa territory where he was baptized. In 1851 he traveled to the Utah Territory across the plains. He lived in Salt Lake about one month and then moved directly to Nephi (Salt Creek), Utah and was one of the original pioneers in Salt Creek. He endured all the hardships and depredations of those early days and volunteered to serve in the Walker Indian War and was later a Captain in the Black Hawk Indian War. He was elected as Sheriff of Juab County and served in that capacity for a number of years.

In 1870 he was chosen to serve as a member of the Juab Stake High Council for the Mormon Church. In the late 1880’s he moved his family to the little town of Wellington, Utah (Mills) on the west side of the Sevier River, 22 miles southwest of Nephi, Utah. On June 9, 1895 a re- organization of the Wellington Branch was effected and Samuel Cazier was sustained as the President with John Williams his first Councilor. This Sunday School died out before the end of the Century for the lack of attendance, but Brother Cazier continued to hold the office of Presiding Elder and was still acting in that capacity at the close of the Century. The Branch was made a part of the Juab Ward on December 31, 1900, when Brother Cazier was released.

He had 7 surviving children at the time of his death in April of 1910: 5 sons, OWEN, Edmond, Edcil, Hyrum and Joseph who all reside in Nevada, and two daughters, Mrs. Pleasant Webster of Arizona and Mrs. Thomas Ingram of Nephi, Utah. He also had two brothers who survived him, Charles of Wyoming and David of Nephi, Utah. He died of old age and being in his eightieth year the human machinery simply stopped running and he had a peaceful ending. His last days were spent at the home of his daughter Mrs. Thomas Ingram of Nephi, Utah. His funeral was held in the Nephi 2nd Ward on Sunday 17 April 1910.