A wonderful family reunion was enjoyed by all who came to North Ogden, UT, this year. New friendships were discovered, and familiar ones renewed by one and all.

Many thanks to Kimberly Cazier and her family for hosting our reunion this year. Marilyn Crezee and Sherie Warner also helped her. It was such an enjoyable time, and it was so good to see everyone again.

We began on Friday, June 27th, by meeting at the pavilion in the Lomond View Park. Kimberly Cazier had a meal of fruit, bread and cheese trays prepared for us and we ate and visited throughout the evening. Her brother Merrill Cazier had researched and prepared a couple of maps for us that showed the locations of the properties that Benjamin Cazier, Sr. and his son Fredrick Cazier had both owned when they lived there. Plans were made for a tour of these sites the next morning, and also of the locations of family graves in the Ben Lomond Cemetery. Stories were traded as we ate and an enjoyable time was had.

At 10:00 the next morning a guided tour of the burial locations of our family was given. Carol Cazier Reynolds and Mike Hoffman led the procession which aided in the locations being found more quickly, and discussions were made about how everyone was related and to whom. Not everyone buried there had a headstone or marker, but with the help of the Internet (www.namesinstone.com) the cemetery was plotted out and it was much easier to find the unmarked graves.

Those who wished to continue on used the maps that had been prepared by Merrill Cazier and toured the surrounding area, finding Benjamin Cazier, Sr.’s old homestead and the Artesian wells that he had on his property. We even collected some of the cooling, natural well water. It was very much sweeter than the modern-day chlorinated city water. Benjamin was the third son of William and Pleasant Drake Cazier. He was born in Brownsboro, Oldham County, KY.

We also found the location where Benjamin had run a mercantile store in partnership with James Storey. There is a 7-11 store there now, and the Ben Lomond Mountain Range still in the background. There used to be a large scale in the front of the store where the wagons would drive up with their loads of grain or other produce to weigh out. Deseretta Cazier, the daughter of Benjamin and his 2nd wife Isabella Montgomery Cazier married George Storey, the bother of James Storey with whom Benjamin was a partner in the store which James owned. 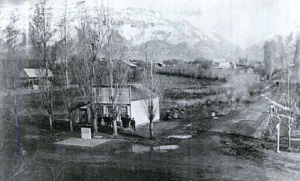 Fredrick Cazier, the oldest son of Benjamin and his 1st wife Olive Lucy Shaw Cazier, was born at Mound Fort which later became a part of the North Ogden City area. The area where the fort stood, which was built as a protection from the marauding local Indians, is now covered with homes and businesses but the “mound” is still very visible. He also owned other land in North Ogden for several years, and had the first eight of his children born there – five by his 1st marriage to Henrietta Clifford and three by his 2nd marriage to Emma Lovina Campbell. Then, being a freighter by profession, he moved his family to Liberty which was east, across the Ben Lomond mountain range, and in the next valley. While they were living there he and Emma had five more children. His thirteenth child, Vordis Reo Cazier (my grandfather) being the last. They next moved to Promontory, UT, in Box Elder County, where Fredrick’s wife, Emma Lovina Campbell Cazier, died while pregnant with his fourteenth child, a miscarriage and unnamed.

  NOTE: There is a local saying in the Liberty community which states that, “Liberty lies between the Garden of Eden and Paradise.” If you look at a map of the area you will see that this statement is literally true.

Promontory is where the “Golden Spike” was driven which connected the “Transcontinental Railroad” from the East to the West. We have a picture of Benjamin, Sr. standing on one of the locomotives at Promontory. Grandpa Vordis often spoke of it and brought this event to my attention. 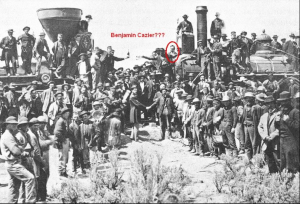  The Family Tree portion of familysearch.org is up and running with still more enhancements to come throughout 2014. I have mentioned in a previous newsletter some of the places where all of us can post “Photos”, “Documents”, “Stories”, and “Sources”, and I have also added several of my own contributions. Yes, it will still change from time to time as new and exciting enhancements are provided for us. I urge you to visit this site and try it out. You can get more instruction from videos and etc. on the “Help” menu on the top right hand corner of your pedigree page. You must have a log in, and in order to view temple ordinances you must have an LDS log in.

A story-picture book for children to read/color is now posted on FamilyTree under William Cazier’s (PID:KWV9-NQB) “Memories-Documents”. It is free to download and is an easy-to-read and understand story of William’s early life, and of his family converting to the LDS Church, and of their journey to Utah. It is formatted so that it can be printed and bound and it is hoped that you will use it to teach your children (or anyone) of the Cazier family’s story and conversion to the LDS Church.
 
Our reunion closed with a fine dinner of BBQ beef and chicken, coleslaw and potato salad, rolls and deserts of southern banana pudding and chocolate or coconut cream pie.

During the dinner there was a talent show in which the young and younger participated and shared their talents with us. There was dancing, and poetry, a humorous rendition, etc. With displays of art and other works on view throughout the evening. A group picture was taken of everyone present at the reunion this year. Next year’s reunion was announced and will be held in Idaho Falls, ID, sponsored by Mike and Patty Hoffman and their family. Several of Benjamin Cazier’s children and grandchildren settled in the surrounding areas. If fact the very first Cazier Family Reunion was held 65 years ago this year at Warm River, near St. Anthony, ID. Benjamin Cazier, Jr. was present there at the age of 91 years.