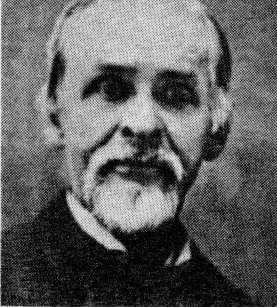 John was born in Virginia near Elizabethtown. We moved from there to Kentucky at Brownsborough, Oldham Co., then to Lovington, Illinois. He told us that he was plowing corn when I was born.

We had a farm near Brownsboro , Kentucky, where we plowed and sowed, reaped and mowed and here John met a girl named Elizabeth Frances La Masters.

He was a full fledged Mormon at this time, would fight for Mormonism but wouldn’t pray for it. He was a man who could be persuaded but not forced.

There were god roads and bridges in Kentucky at that time, for it was then well settled. Kentucky is a very old state.

We left Kentucky in 1840 and moved to Illinois. Slavery was in vogue at that time, however we never owned any negroes.

John was an expert in driving cattle. Frances quit him in Nephi, Utah and he took another wife in polygamy, Angeline Holowell, who was of very good blood. Her father was a contractor and builder in England, her mother a good natured woman and industrious but very quick tempered. They started for Utah in about 1846. John was traveling with his father at this time and when the United States called on men to fight Mexico, he volunteered. His older brother did also. He went to Council Bluffs [and] enrolled as a U. S. Private. He became very sick in New Mexico and was sent to Pueblo. When he got well he went to Montana. Enroute he was in constant danger from Indians and could never rest near a fire for fear they would see it. He finally reached Colorado but found his wife was left in Council Bluffs. He continued to go west but found very little to eat along the way, often eating weeds. One day he had a feast for he killed three wild turkeys in one shot.

The Sioux Indians took him prisoner one day and he thought his time had come but they let him go free. He got as far as Grand Island when Brigham Young sent word for him to come back and stop traveling for the winter. When they got to Winter Quarters John went ten miles farther to find his wife, crossing the Mississippi river. He didn’t have the money to cross the river so he and his horse swam it – his horse was blind.

He traded with the Indians to make enough money to come W3est, about 1013 miles from Omaha to Salt Lake.

He worked in Missouri cutting cord wood. He could but six cords a day. It takes about two men of today to do this.

When he had enough money he crossed the plains to Utah. This was during cold weather. There were many other wagons too – all drawn by ox teams. They missed some of their cattle one morning. They were stolen but he found them, took them and went back and started for the mountains. They took a widow woman with them and her three children, making seven in all – himself, his wife and two children.

John was a very impatient man, he couldn’t go slow even though sometimes he would have saved time in the long run. He was very calm in times of great peril.

They finally reached Salt Lake and settled in the Fourth Ward.

Brigham Young governed the church by the pulpit as well as being appointed by the president. He was one of the finest generals this world has ever had. He gained victory without shedding blood. He was always the Indian’s friend.

John came to Nephi in 1851, built a house with a dirt roof and a dirt floor, plowed and sowed, reaped and mowed like other people.

He took part in the Walker war, which lasted about two years and three months. Walker had about one hundred Indians in his tribe. They had a battle in Echo canyon about August 1, 1851. John was one of the foremost leaders. He seldom closed both eyes. Old guns of that day were just as dangerous to those behind as to those in front. John was quick and ambitious. As a boy he was very high toned in dress, even getting up on a chair to put on his pants so that they wouldn’t get dusty. He was very fond of dogs and a gun.

It took three days by team to go to Salt Lake then. During the Walker War the men were camped in Salt Lake. There were only about 150 men to do the fighting. They lived on stolen beef. Peace was made in the spring of ’58.

John was a democrat, a southerner. He could read pretty well, always read the army reports for the people.