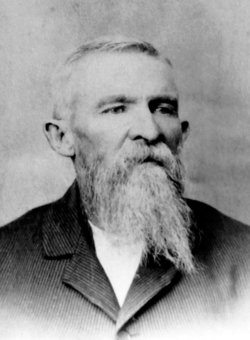 A Heritage Has Value Only If You Cherish It (PDF)

His father, born in Virginia, started moving westward as soon as he attained manhood, seeking he knew not what. Some said it was the tide of empire. Others felt that it was in search of more open land and better soil. Some said it was a need to escape the pressure of people. In his later years he maintained that it was because he needed a religion and faith that he could champion and feel safety in.

In early 1844 Mormon missionaries came knocking at his door. In late August of that year he endorsed their religion and was baptized into the LDS Church. From that decision he never wavered. Slowly his entire family became converted and joined the church. He and his family were among the first caravans to follow Brigham Young across half the nation to the promised land in what later became Salt Lake City and Utah. Along with other families, he was sent to colonize the Salt Creek valley in lower Utah.

He could have been born with a long flowing white beard for all that I know. That is the way I first saw him and that is the way he remains in my treasure house of memories today. My mother often marveled at how clean and white he kept his beard in his declining years when his health was failing.

He was tough. By tough I mean able to meet head on the rough edge of adversity and turn it to his own advantage. If he wasn’t tough, it was his own fault, for starting at the age of three he followed his father through subsequent moves from Kentucky to Iowa, to Illinois, and eventually across the great plains to the Salt Lake.

At, a young age he started doing his share toward contributing to the welfare of the family. The sixth of seven boys and ninth in a family of ten, he was low man on the totem pole but never let that disturb him. At age 14 he was whacking bulls in the long trek from Nauvoo to the Great Salt ‘make. At 16 he was standing guard against Indian attacks with a rifle on his shoulder. At 28 he was a soldier in the Black Hawk War which centered around what is now Nephi, Utah.

He had married, started a family, and made some headway toward gaining a foothold in this world both spiritually and financially when the call came to settle and colonize what is now Star Valley.

Selling some things, abandoning some, and taking what he could with him, he responded to the call in the fall of 1880. His wife suffered so severely from ill health that winter that he moved back to Idaho where the climate seemed more favorable. This was not, to be, however. The church authorities asked that he return to the valley and take charge of the saints now there as presiding elder.

It. must have been a hard struggle getting things organized and pushing the church work forward as the authorities intended. There must have been times when he felt like quitting. If this was so, his family never heard of it. He laid his problems in the lap of the Lord with an abiding faith that they would be solved.

In the service which he rendered a notable number of things can be cited. He had surveyed and laid out the town of Afton ten blocks square. When a ward was organized he was the first bishop. He was the first patriarch. He served two term in the state Legislature.

He contributed much toward what, I am today. At age eight when I was baptized, he gave me two priceless books–Rid paths, “History of the World” and an abridgement of the Bible called “‘The Beautiful Story.” To me, a more beautiful story was never told. He died as he had lived, quietly, honorably, and well. My last memory of him is that of applying cold cloths to his kindly face as he lay relaxed in death. He was my grandfather, Charles Drake Cazier.

I do not write this simply to extol the virtues and accomplishments of my grandfather or to boast of my lineage. No one could be more proud of the heritage which he left than I am. My sole purpose in writing here is to remind all of us of the heritage that we have here. Not all who are here now can claim the same heritage, but surely all have one which they should cherish.

Star Valley was settled by families. As families they grew up together and developed the valley. Their descendants are here today. For a long period of time our semi-isolation protected us to a great degree from the outside world. Such temptations as came our way we managed to resist to the point where we developed a reputation for clean and righteous living. Our youth entering the labor market are in demand largely because of this. This is a credit which we can accept, but along with that credit comes a responsibility to maintain this high standard.

The world is now at our front door and temptation is far greater than it ever was before. It is now far too late to say, “Stranger, go home.”

Grudgingly, on my part, we can move over and offer the stranger a small bit of our fast diminishing land. We can offer the firm handclasp of friendship and extend an invitation to join us in that which we love most, the practice of our religion.

We can cherish that heritage which is ours; and in so doing gain the strength to resist any and all temptations which come our way.